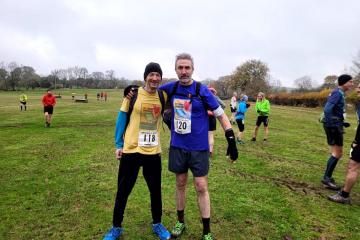 Weekly charity events are being held to raise money for the people of Ukraine.

Watford-man David Vannen and his friend Simon Cole are taking part in a series of fitness challenges in December and January so money can be spent on aid items for the victims of Russia’s invasion.

The most recent challenge was Saturday 10 and Sunday 11 December where they took part in a 23-mile hike from Eastbourne to Brighton.

And on Sunday, December 4, the pair ran a fell race in Shropshire Hills near Telford.

A nine-mile race, the two climbed nearly 800 vertical metres over a challenging off-road course in just over two hours.

Mr Vannen, 51, said: “We travelled in the night before and camped out under a tarpaulin in freezing conditions to add to the challenge.

“The race was very demanding with some steep ascents over the hills, and temperatures of around minus 2 degrees Celsius.

The two climbed nearly 800 vertical metres over a challenging off-road course in just over two hours. (Image: By Hand Ukraine)

“All the way around, we were thinking of the people we’ll be helping in Ukraine who are suffering in the cold much more than us.”

The duo’s next challenge is their beer run in Hackney and they are in talks with organisations to hold a participatory event to get more folks involved.

So far, £1,240 has been raised by the pairs efforts and the are still taking donations.

The fundraising idea came about when Mr Cole, 50, went to the Poland/Ukraine border to volunteer in October.

Now he and Mr Vannen plan to go back to the border to buy needed aid items, such as thermal clothing and foil blankets, in Poland to gift to the people of Ukraine.

The duo camped out the night before. (Image: By Hand Ukraine)

Mr Cole said:“Some people have driven vans all the way to the east where they could hear the sound of artillery as they dropped off supplies.

“At least they were able to leave, unlike so many locals; I heard some horrible stories of what has happened to ordinary people who were busy just cracking on with their lives but are now sitting in the dark fearing missile attacks.”

If you would like to make a donation to By Hand Ukraine, visit https://www.justgiving.com/crowdfunding/byhandukraine.

Have you got a story for us? You can contact us here.

To receive breaking news alerts or newsletters sign up here.

Head coach Slaven Bilic said his players didn’t even get the basics right in their 2-0 defeat at Middlesbrough. Watford Observer | St. Albans News…

A memorial bench has been installed to remember a former police officer who died trying to save the life of another. Watford Observer | St. Albans News…

Weekly charity events are being held to raise money for the people of Ukraine. Watford Observer | St. Albans News…

Turkey sandwiches, paper hats from crackers and changing into your new PJs after lunch; what is your favourite Christmas tradition? Watford Observer | St. Albans News…

Want to post on our blog? Submit an article