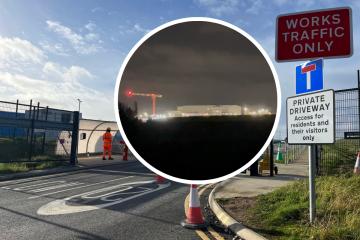 It added that a number of members had mentioned the noise, which they claim has only started relatively recently, with some even saying it is “keeping them up at night”.

A spokesperson for the group said: “HS2 is conducting noisy works well into the night, on weeknights when adults and children in the area have work and school the next day.”

The group describes the sound as “a low, dim hum” in bursts of up to 10 seconds, which “dominate the area”, usually in the evenings until 11pm.

“Residents of Maple Cross, West Hyde, and the surrounding areas already have to contend with a number of disruptive knock-ons from HS2, including speeding heavy goods vehicles, congested roads due to closures and light pollution,” the spokesperson added.

“Noisy construction work late at night has now been added to that list.”

There will be 1.4 miles of track in the Three Rivers District for the new high-speed railway, from London to the West Midlands, which includes the Chiltern Tunnel near Maple Cross and the Colne Valley Viaduct to carry trains above a series of lakes and waterways.

A spokesperson for HS2 Ltd said: “We are working hard to reduce disruption for local communities during the construction of the HS2 project.

“We have consent to operate the site near Maple Cross 24/7 to support the construction of the Chiltern Tunnel and Colne Valley Viaduct, with monitoring in place to make sure noise level limits are not exceeded.

“We take all complaints extremely seriously, and will take action to reduce noise levels if they are exceeded.

“Our performance on noise is published monthly.”

Head coach Slaven Bilic said his players didn’t even get the basics right in their 2-0 defeat at Middlesbrough. Watford Observer | St. Albans News…

A memorial bench has been installed to remember a former police officer who died trying to save the life of another. Watford Observer | St. Albans News…

Weekly charity events are being held to raise money for the people of Ukraine. Watford Observer | St. Albans News…

Turkey sandwiches, paper hats from crackers and changing into your new PJs after lunch; what is your favourite Christmas tradition? Watford Observer | St. Albans News…

Want to post on our blog? Submit an article